Takayoshi Wanami’s next concert will be on Sunday, 23rd February 2021 at 14:00 at Higashikanagawa Culture Center in Yokohama. This is a lecture concert with Mineko Tsuchiya, and the programme includes music by Prokofiev, Takemitsu and Schubert.

a Piece for this Month

J. S. Bach: Adagio from the Solo Sonata no.1 in g minor

Born in Tokyo in 1945. Takayoshi Wanami began to play the violin at the age of four and went on to study with Kichinosuke Tsuji,Saburo Sumi and Toshiya Eto. Later, he continued his studies in Europe under Joseph Szigeti, David Oistrakh, Sergio Lorenzi,Riccardo Brengola and Sandor Vegh. 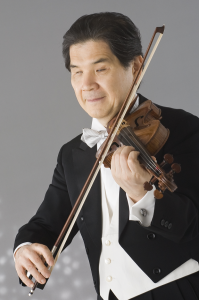 Wanami made his orchestral debut in Tokyo in 1963 with the Japan Philharmonic Orchestra and the following year, toured the USA as soloist of the Toho Conservatory String Orchestra. He was awarded prizes in the Long-Thibaud International Competition in Paris in 1965, the Carl Flesch International Competition in London in 1970 and received the Ysaye Medal from the Ysaye Foundation in Brussels.

Wanami has performed with many renowned orchestras such as the Leipzig Gewandhaus, the Philharmonia, City of Birmingham Symphony, BBC Philharmonic, BBC National Orchestra of Wales, Boston Pops, Festival Strings Lucerne, Zurich Chamber, Slovak Chamber, London Mozart Players and the Academy of St. Martin in the Fields, as well as with all the major orchestras in Japan. Conductors with whom he has collaborated include Rudolf Barshai, Gary Bertini, Harry Blech,Raphael Fruhbeck de Burgos, Sir Neville Marriner, Kurt Masur,Tadaaki Otaka and Seiji Ozawa.

Takayoshi Wanami has recorded for Chandos the Tchaikovsky, Bruch and Mendelssohn Concertos with the Philharmonia Orchestra under Anatole Fistoulari, and Bach Concertos with the London Mozart Players under Harry Blech and the oboist Leon Goossens. His recording for Pickwick of the Brahms and Schumann violin concertos with the London Philharmonic, conducted by Adrian Leaper, led the Gramophone to note: “It says much for the brilliance and concentration of the Japanese violinist, Takayoshi Wanami in the Brahms that, even in direct comparison with Perlman, his claims are still impressive.”

His other recordings include all the solo violin Sonatas and Partitas by J. S. Bach, six Solo Sonatas by Ysaye, nine contemporary Japanese works (both of which received Superior Prizes in the Japan Arts Festival), a live recording of his 50th birthday concert in Tokyo in 1995, and three Brahms Sonatas with Mineko Tsuchiya. Recently,his new album of 15 favourite violin pieces entitled “Schoen Rosmarin”, and the live recording of Schubert’s chamber works have been released in Japan.

In addition to a busy concert schedule, Wanami spends considerable time teaching at the Toho Conservatory in Tokyo and at his annual summer music course in Yatsugatake. Since 1991, he has been directing his own string orchestra, Izumigoh Festival Orchestra.

In Britain, he has given master-classes at the Royal Northern College of Music in Manchester, and at the Purcell School.

Future engagements include further recitals and concerto performances in Japan as well as a tour to Hungary in October. In April/May 1998,he will be giving a series of three recitals in the South Bank Centre’s Purcell Room comprising solo violin works by Bach and Ysaye.